By Dans banana Loafcake  Wed Jan 03, 2007 7:44 am
Like 1
Wed Jan 03, 2007 7:44 am #6567
Hey I was just wondering if anyone knew who carved the pumpkins at the end credits of one of the Roseanne Halloween specials? They really stuck in my head all these years and were the only hint to a Brit that a pumpkin could be more than just the triangle eyes and nose of a classic jack'o lantern. They were very similar to the ZP/JP look but these were years ago, early/mid 90's. They were of the cast I think, Roseanne, Dan, Jackie, Becky, etc.

I dont even know what season it was from, I know Amazon.com do a Halloween special DVD with a Roseanne'o lantern on the cover art (see below) but this is region 1 and the UK's region 2. I'm hoping one of you guys can help me - more photo, what season it was, who carved them, although I think I've picked the wrong time of the year to ask. 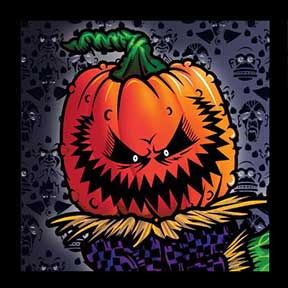 I know that Gene at Masterpiecepumpkins has a very comprehensive collection of the vintage PM pattern books, but I don't remember seeing Roseanne as part of that. Of course, this may not have been something they actually put together in a kit for retail sales.
"Some people never go crazy... what truly horrible lives they must live."
- Charles Bukowski

It just doesn't 'feel' like a PM stencil, neither of them do. I've looked on Masterpiece pumpkins and no there isn't any Roseanne stencils in Gene's PM collection. Although there is a very brief mention of them on PumpkinWizard. Who's running that site now? My guess is that it was specially commisioned for the show.

It just looks like a ZP stencil or close to a JP one but JP you said it wasn't you and Ryans only like 18 months older than me and I was ten at the time I think, so unless Ryans been doing stecils in Primary (grade) school there is someone else out there!! Kinda exciting!

By 2manyferrets  Mon Jan 08, 2007 7:47 pm
Like
Mon Jan 08, 2007 7:47 pm #6571
I know exactly what you are talking about and Im sure alot of the people in the pumpkin carving community will say that was one of the first things tht inspired them too. I saw it a few times too and after reading this post, I did some research and couldnt find anything either. If I remember correctly I think there were not only the carvings in the ending credits, but through out the episodes too. If you dont mind, Id like to post this question in another forum. Maybe someone else will know???

The first time I found a PM kit was in a local orchard. It was several years later before I saw them available pretty much everywhere.

Patti wrote:According to what I can find on google, PM did the Roseanne pumpkins. I recall that the pumpkins started showing up on a few television shows prior to their release in major stores.

For a family business they were on the ball with the marketing from the begining.

I agree now that it does appear to be PM. Has anyone got any images of the other pumpkins from the show?

According to this article:


In Denver, scrappy Pumpkin Masters Inc., a 16-employee company that sells jack o'lantern carving kits, has doggedly exploited its Halloween niche. It works without an agent to get its tools--and, more often, the pumpkins carved with them--onto dozens of TV and movie sets. Marketing staffer Cheryl Stoughton scoured Variety to learn of upcoming productions, took out a $200 ad in Debbie's Book, and spent hundreds of hours phoning studios and following up with press kits. Now, she says: ''The studios are coming to us.'' Once Pumpkin Masters got its pumpkins onto Roseanne and other shows, Stoughton hyped the connection at Halloween trade shows and subsequently won orders from Wal-Mart Stores Inc. (WMT) and other chains.

Gotta hand it to Pumpkin Masters for jump starting this industry, and really taking pumpkin carving to a new level. And with any luck, Zombie Pumpkins! (and sites like it) can take things even further.

So while it seems PM is the company behind Roseanne's pumpkins, I'm still curious as to who the actual designer is. Does PM employ in-house artists? I'm sure they have their regular crew, but I also know that many of the patterns printed in their books are user-submitted for their contests.

Over the years, PM has offered a ton of patterns. Since they come from many different artists, they all different levels of difficulty, quality, and artistic style. That can keep things interesting, but for Zombie Pumpkins! I take pride is amassing a wide ranging collection which I can say... were all made with my own two hands.

Still waiting for the TV studios to come calling though.

Only joking, if only I was Mr Big ( Now girls dont read into that too much!

). But honestly though Ryan, why dont you do what PM did back in the day and ring up some television production companies and film studios, they can only tell you to get lost and you'd have nothing to loose. Hey they could even give you a hand with specially taken promotional shots with shodows and the heads up on films in development uberearly. Although saying that you may have to pay royalties so on second thoughts dont do that!

) and now its a multi region bad boy. Hooya!

Will relay what Roseanne pumpkins there are and the quality of them, plus I get to relive my early teenage years while watching them... I'm such a Geek!

The PM carvings apear in season 3 (trick me up trick me down, 1991) and appear on the end credits too. Apart from the generic PM designs there is only one custom carving and that is only of Roseanne herself (the image posted above). I watched all the other episodes and PM designs can be seen in every Halloween show there after. The only other end credit PM display though is in season 5 (Halloween V, 1993) and again there's only one custom carving of an updated Roseanne (the image on the cover of the DVD above).

I'm really disapointed as I was sure they carved some of the other characters in the show. Suppose I was wrong.

By Zombie Pumpkins!  Thu May 17, 2007 12:53 pm
Like
Thu May 17, 2007 12:53 pm #6801
Excellent research Dan. It's good of you to do the legwork on Roseanne's Halloween history. So aside from familiar PM designs, there's only been two custom stencils of Roseanne? Well I hope you still have a fun trip down nostagia lane as you watched that DVD.

By mesmark  Fri May 18, 2007 5:14 am
Like
Fri May 18, 2007 5:14 am #6802
Here's a promotion idea. Make up a stencil of some local TV new caster. Ryan's stencils are pretty easy to carve, so try to get a project going at a local elementary school. Tell the school you'd just like to teach the kids about carving safety and what they can really do.

Have those kids carve the TV news caster and I'm sure you can at least make it on the local news.

But who knows if Ryan has time for orchestrating something like that.
Halloween Certificates | Halloween Cards | Halloween Party Invitations

Dans banana Loafcake wrote:Ok I've watched the DVD and I must say I'm a little disapointed both with what I remembered being carved and the shows themselves. Nostagia's overrated.

You got that right. I remember how freakin' awesome Land of the Lost and Thundar the Barbarian were when I was a kid. I recently saw both of these and sheesh... both were really bad. Thundar especially so.
"Some people never go crazy... what truly horrible lives they must live."
- Charles Bukowski

Mister_JP wrote: You got that right. I remember how freakin' awesome Land of the Lost and Thundar the Barbarian were when I was a kid. I recently saw both of these and sheesh... both were really bad. Thundar especially so.

Now you know you are old

I need not suffer in silence while I can still moan, whimper and complain.
http://www.sodajazzpumpkins.co.uk/

Mister_JP wrote:
You got that right. I remember how freakin' awesome Land of the Lost and Thundar the Barbarian were when I was a kid. I recently saw both of these and sheesh... both were really bad. Thundar especially so.

Did you do the Sleestack stencil before or after you saw Land of the lost again?