By pagemaster1993  Thu Aug 11, 2011 1:14 pm
Like
Thu Aug 11, 2011 1:14 pm #48949
Well last night while watching Ghost Hunters International they had a preview on t.v. for Freddy Kruger to be a downloadable character on Mortal Kombat. Heard nothing about Jason Voorhees, but that would be cool to have a Freddy versus Jason Kombat.

Would be even cooler if it was the original Freddy (Robert Englund) and not the one from the remake. And if I may be a geeky nitpicker, Freddy isn't supposed to have two bladed gloves. I guess they figured it would give him more options for fighting moves.

By zombombie  Thu Aug 11, 2011 3:28 pm
Like
Thu Aug 11, 2011 3:28 pm #48953
Both those things annoyed me instantly about Freddy when I saw him. Not Robert Englund and TWO gloves?! Not cool. Despite those, throw Jason in there and you've got my interests piqued.
Check out my YouTube channel! http://www.youtube.com/channel/UCyuEzf43m-4BfCxBNLH5t8w

Okay, now I'm really nitpicking. It is a pretty cool character to have in the game though. Interesting choice at this time. No new Nightmare movie is on the immediate horizon as far as I know. So why are they pushing the Jackie Earle Haley version of Krueger?

I also read that his story was he was angry that Shao Kahn was killing people hence not enough dreamers to attack....

I could be wrong on both counts! 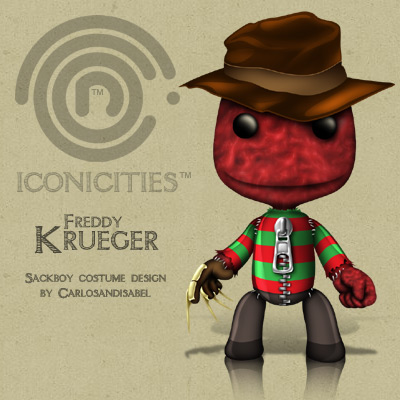 With today's "rated M for mature" game titles, you'd think there would be more video games based on horror movies. There are surely plenty of horribly bloody games (so many with zombies) but not so many with movie villains in them. I guess the Saw movies got a couple games, but there must be other franchises that would make a good game.

Ajax -- I like the look of that Freddy costume for Sackboy. I haven't played Little Big Planet in ages, but a costume like that might get me to pick it up again.