First up is Bratzillaz - kind of like the Bratz versions of Monster High dolls (without the added history of the monsters that inspired the MH dolls though):

And secondly we have Stretch Screamers - Stretch Armstrong-like dolls but movie monsters instead, which also scream when pulled:

You might already have both these in the States but I'm pretty sure they're new over here! And I have to say, it's pretty exciting to see such Halloween themed toys on the TV in August!

So I guess if you've got a neice/nephew/son/daughter with a birthday around Halloween, these might be worth looking at

Even if their birthday's not around Halloween! Or maybe you just want one for you

By Raven  Tue Aug 14, 2012 4:37 pm
Like
Tue Aug 14, 2012 4:37 pm #65431
I used to despise Brat dolls, but I like these! I like the Monster High dolls better though. I'm not sure if we have either of these in the states. I don't pay attention to commercials or watch enough t.v. to see them if they are here. I'll keep an eye out for them now.
"Who is this irresistible creature who has an insatiable love for the dead?" (Formerly known as RavensDestiny)

By Zombie Pumpkins!  Tue Aug 14, 2012 8:55 pm
Like
Tue Aug 14, 2012 8:55 pm #65439
As a child of the 80s, I feel like we had some great monster toys. You could have My Pet Monster or a Boglin. You could throw around some creepy Madballs. You could trade cards and stickers like Garbage Pail Kids. There really seemed to be a trend toward monster toys, especially the type that you could use to gross out your sister. At least, that's how I remember it.

As an adult, toys are not marketed in my face anymore, so I'm out of the loop. It seems like today's kids don't have as many options for gross or spooky toys. Any parents out there want to chime in with evidence to the contrary? For now, these are some great finds, zombombie. Good idea for a topic!

Regarding the Bratzillaz... well my first through is that they seem like a clear ripoff of the Monster High dolls. Although, Bratz dolls had been around long before Monster High came on the scene with similarly proportioned dolls with big heads and exaggerated facial features. So maybe Monster High borrowed ideas first. But still, clearly these Bratzillaz seem to be hopping onto the trend started by Monster High. Which isn't really a bad thing. More Halloween toys = good for society! I prefer Monster High though. Each MH doll is a unique classic monster. Werewolf, ghost, vampire. But the Bratzillaz are all just witches. Apparently they study their spells at some witch academy. Borrowing a bit from Harry Potter too, perhaps?

I assume these Bratz cousins will be available in the US, but those Stretch Screamers seem to be UK based. They're made by this company called Character. Pretty cool though! Check out this video and see how these creeps wiggle and stretch. Gotta love how their eyes or brains pop out of their head when you squeeze them (it's funny that they sell replacements for those pieces, just knowing that kids will pop out the mummy's eye and lose it). Also, this commercial feels like it could be right out of the 80s too. 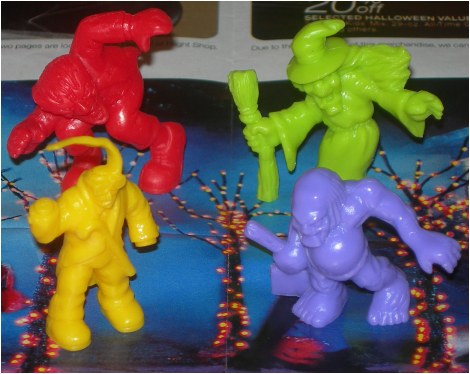 I loved those wee guys

By pagemaster1993  Wed Aug 15, 2012 8:22 am
Like
Wed Aug 15, 2012 8:22 am #65446
Actually the thing about Bratz and Monster High is that they are from the same company. I remember Stretch Screamers when I was younger they actually had a McDonald's promo which I got everyone of (and can take pics of if you like), that is except for the two that got discontinued for child health and safety reasons. I wonder if I will be able to get these two new ones, I would really like the Frankenstein's Monster one.
"Ask not what your pumpkin can do for you; as what you can do for your pumpkin." -- Unknown

pagemaster1993 wrote:Actually the thing about Bratz and Monster High is that they are from the same company.

I wasn't so sure about that, so you lead me to do some research. Bratz are manufactured by MGA Entertainment. Monster High dolls released by Mattel.

Mattel sued MGA Entertainment for $500 million, alleging that Bratz creator Carter Bryant was working for Mattel when he developed the idea for Bratz. And MGA Entertainment filed a lawsuit against Mattel, claiming that the "My Scene" line of Barbie dolls had copied the doe-eyed look of Bratz dolls. The two companies returned to court in 2011 to renew their battle over who owns Bratz, which this time included accusations from both companies that the other side stole trade secrets.

Based on these legal battles between MGA and Mattel, it seems clear that they are not so friendly. And the Monster High vs. Bratzillaz debate is only going to add fuel to that fire, I suspect.

First was Deadstone Valley. One of those online and physical toy deals:

I think my favourite is Professor Hannah. "Here lies Scientist Hannah Batiste, Who was killed in her lab by a radioactive beast."

Next up was something new and, to me, VERY exciting from Lego! Lego Monster Fighters:

I saw this too!

There were a few more of these in this range too... I could have spent a lot of money today!

The monster Lego's are awesome as well. My nephews are Lego maniacs so I think for Christmas I will get them some. The Lego haunted house would be mine though.

As a kid, I would have loved something like Deadstone Valley. With sets like that, I just love the idea of collecting all the random characters. I'm sure that's what the manufacturers are counting on. Every single character might not be super special, but there's something fun about collecting them all!

Also, Lego has my respect. Impressed to see so many monster sets. Today's monster kids still have some great options for playthings.