By maegnus  Fri Aug 28, 2009 9:47 pm
Like
Fri Aug 28, 2009 9:47 pm #22865
Scarecrow was already my favourite Batman villain, but this new interpretation is by far the coolest and scariest I've ever seen. I can definitely see the face with the hypodermic needle fingers (ala Freddy Kreuger and Edward Scissorhands patterns) looking creepy on a pumpkin (you'd even get the same orange glow in the eyes). 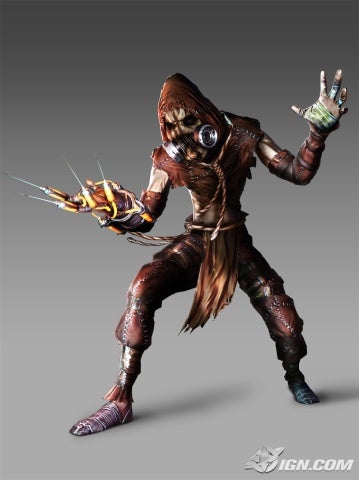 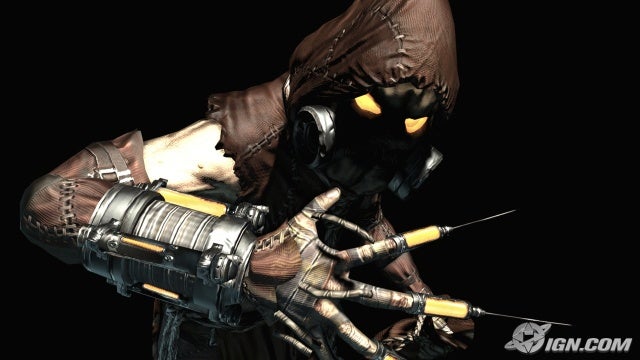 I won't spoil anything, but everything about that Scarecrow is pure win.

As for his appearance, the hood, gas mask and needle fingers are all logical for him, and yet extreme and otherworldly. I'd love to make a pattern of Scarecrow, but I'm not sure anyone would recognize him, other than gamers who own the game.

I'd love to dress up as him one year for Halloween. I might try it this year, if I'm not too busy with my dot room project. At 5'9, 120lbs, I am pretty much built for the character.

By Failure101  Wed Sep 16, 2009 7:26 pm
Like
Wed Sep 16, 2009 7:26 pm #25207
As I said in The Joker pattern post I loved this game. It's really the first game in who knows how long I have felt absolutely compelled to complete 100%. I just had to find each and every riddler clue, trophy, and villan audio interview. Great game, visuals, gameplay, atmosphere, replayability, it's all there and worth the money.

By SaneInsideInsanity  Wed Sep 16, 2009 8:57 pm
Like
Wed Sep 16, 2009 8:57 pm #25221
ive never played the game i would give him a carve due to pure creepyness i dont think its an image that really needs getting
Old witch Mary, quite contrary,
How does your garden grow?
With moss and slime,
and poisonous vine,
and toadstools all in a row.

. I have to buy that game, I love batman.
"Some people are born to use a chainsaw. Me. Well I got one attached to me. "

Scarecrow does rock in that game!

zombiepumpkins wrote:I just encountered Scarecrow again in the game. Boy, he does steal the show. So creepy and surreal. While, I love all the gags and humor of the Joker, the Scarecrow could probably be given his own game and it would be quite a chilling experience from start to end.

They really nailed him, didn't they? I was so pleasantly surprised with the morgue encounter, but I felt that it was a little short. A character that badass needed more screen time than that (cough, Nolan movies). Sure enough, later in the game his gas hit me when I least expected it. I found it so befitting that unlike other villains whom you fight through a stage and then beat as a boss, Scarecrow is way more ambiguous, popping in and out throughout (ala Catwoman), making you stop what you're doing, and you never really beat him. The last encounter is so sweet. I love Scarface's cameo as the warden. It was also cool to discover his little hiding spots.

I suggest you beat the game with a high number if riddler challenges beaten, and Scarecrow just might get the last laugh.

Failure101 wrote:"YOU'RE MIND WILL SHATTER LIKE GLASS!! HE HE HE HAHAHA"

I definitely died a few times on purpose in his trippy challenge world just to see all his awesome death screens. My favourite quote is the one in my signature.

The scarecrow does look awesome i think ill be looking for the game on goozex now
Old witch Mary, quite contrary,
How does your garden grow?
With moss and slime,
and poisonous vine,
and toadstools all in a row.