By zombombie  Fri Jul 13, 2012 4:55 am
Like
Fri Jul 13, 2012 4:55 am #64340
So I downloaded the first episode of The Walking Dead game, "A New Day" and completed it in one sitting. I really enjoyed it thoguh it's only around 2 hours long but it's like playing an episode from the show with the visuals of the comic! Very well written, well paced, gory, touching, and immersive. It's point & click in origin but doesn't really play like a point & click game. 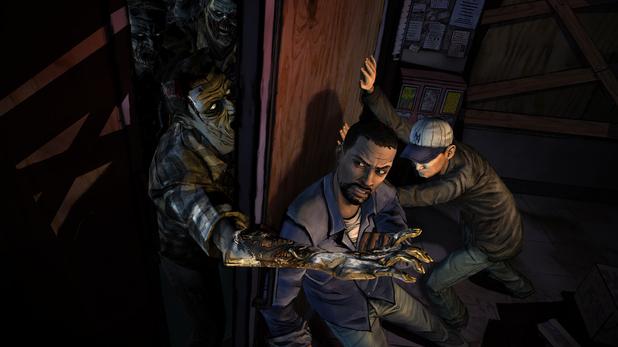 You play as Lee Everett, a man with a bit of a shady past who ends up befriending a little girl. There's some nice nods to the books and comics as the adventure progresses, and I don't think it's giving too much away to say that it ends on a cliff hanger. The choices you make throughout the game have an effect on what happens to you and the characters later, but also have a greater long term effect if you play through every episode. Episode 2 is already available so I think I'll need to pick that up soon. Would highly recommend for horror fans and fans of the show and/or comic

By Raven  Mon Aug 13, 2012 5:10 pm
Like
Mon Aug 13, 2012 5:10 pm #65420
I noticed AMC also has The Walking Dead social game on Facebook. I played it for about a minute the other day so I can't say what it's like, but those on FB might want to check it out.
"Who is this irresistible creature who has an insatiable love for the dead?" (Formerly known as RavensDestiny)