Zombie Pumpkins! wrote:I agree Sloaner. The Universal Monsters are pretty much the only foam-kins I've carved for my own personal display. As you say, the classics will never go out of style.

I think some may say that there are a few characters missing from that display. Bride of Frankenstein, Creature from the Black Lagoon, Wolfman, and The Mummy(which still needs to be released).
"Ask not what your pumpkin can do for you; as what you can do for your pumpkin." -- Unknown 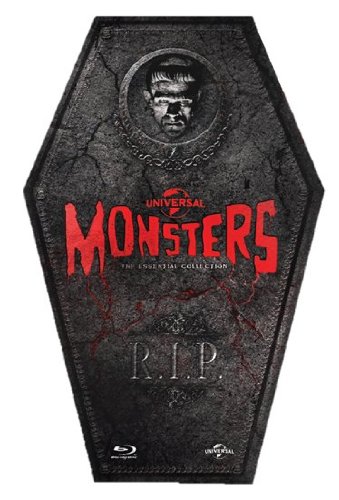 zombombie wrote:How's this for a box?! So glad this is coming to the UK

That's awesome. Apparently a "Limited Edition" packaging, and I can only find it on UK sites. Do you know if it's exclusive to the UK? For sale at Amazon.co.uk and Play.com, among others.

The more standard box looks like this photo below, which is also pretty darn nice. Nice book format. Seems they did a really nice job putting this collection together. To be released at the start of October. Perfect timing. By Zombie Pumpkins!  Mon Aug 06, 2012 6:19 pm
Like
Mon Aug 06, 2012 6:19 pm #65169
I hear ya, zombombie. Part of me prefers the standard box because it will fit more neatly on my shelf. But of course, if you're gonna have a custom box for monster movies, you can't do much better than the classic toe-pincher coffin shape! So I'm simultaneously content with the standard version and also jealous of your UK folk!